This year Frost over Barraba will be judged by Julia Griffin, Simon Scott and Irene Esteves, who are also guest artists. Our other guest artists are Peter, McKnight, Matt Begg, Marius Vanderkley, Michele Maddison, Peter Dwyer and Mark McAlpine. 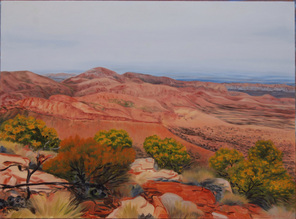 Towards Mt Conway II by Julia Griffin
Julia Griffin was born in Port Moresby, PNG in 1958 and grew up in Sydney. She completed a Degree of Visual Arts, majoring in printmaking, at Sydney College of the Arts in 1979 and did post-graduate studies at the Central School of Art in London. She moved to Walcha, NSW in 1982 when she married Stephen King, another artist and farmer.
Since then she has had twenty-one solo shows, six of which were at Coventry in Paddington, Sydney and four at NERAM, Armidale and many group shows including the Portia Geach Memorial Award, the Mosman Art Prize, “In(two)art” and selected five times as a finalist in the Country Energy Art Prize.
In 2006 her work traveled to the Czech Republic for a group exhibition of Walcha artists. She was an invited artist in the 2006 Redlands Westpac Art Prize and in 2008 won the People’s Choice in the Norvill Art Prize. In 2010 she and Stephen King had a joint exhibition in Vienna, Austria and a solo show at the Tamworth Regional Art Gallery. Julia moved from printmaking to painting about 15 years ago, working in both watercolours and then oils on canvas, paper and board. “I paint the landscape in which I live and particularly what I see from the road. Recent trips out west have given me a new appreciation for the flat lands. The weather is always reflected in the landscape and this work from walking the Larapinta trail and the Red Centre describes a more intimate appreciation of an ancient landscape.” More information about Julia Griffin.
Simon Scott is a photographer living in Armidale, NSW, Australia. He was born in London but grew up in Ndola, Zambia, Africa. He developed his love for photography by watching his father use an SLR to document many family holidays and special moments. He studied Black and White photography in the UK and built up a flourishing freelance photography business in London while working as a network engineer in the telecommunications industry. He is well travelled having spent time exploring North America, Vietnam, Australia, Europe and has recently returned to Africa 3 times in 12 months. He teaches Digital photography at the New England Institute of TAFE, runs private workshops as well as working as a successful freelance photographer. He has photographed for Fairfax Press, ACP Magazines, Armidale Dumaresq Council, Armidale Chamber of Commerce, as well as countless local businesses. He is the chief photographer for the New England Focus Magazine. 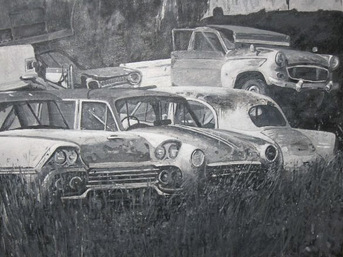 Peak Hill by Matt Begg
Matthew Begg was born in Camden Australia in 1979 and is now residing in Dubbo Central Western NSW. Matthew is a self-taught artist, he developed an interest in art as a small child and as long as he can remember he has drawn and painted. Matthew usually works with acrylic on cotton because of its versatile nature. His work is highly detailed, elaborate and engrossing and demonstrates a sophisticated knowledge of perspective. Matthew is inspired by everyday life and architecture. He sees the beauty in these everyday scenes that most of us probably overlook, and captures this beauty in his artworks. More information about Matt Begg.

Irene Esteves says, "Clay is my passion, I love to push its boundaries". Irene work in earthenware and porcelain; casting, throwing and hand building. She specialises in primitive firing but also employs dry and shiny glaze and use decals. Some of Irene's work is inspired by the sea, some by human nature. She also creates colourful mosaics nipping tiles to form major themes. Irene has exhibited widely, won many awards, run 54 workshops and led five Community Art Projects.  Irene is currently Artist in residence at the Upper Hunter Libraries holiday program. 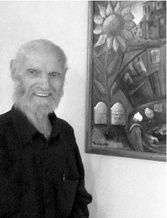 Marius Vanderkley was born in The Netherlands. He studied at Eindhoven Technical College and The Phillip Art School before serving a 3 year apprenticeship with renowned Hungarian animator George Pal. After surviving the deprivations of the Nazi occupation during WW2, Marius and his wife immigrated to Australia to establish a new life and to raise their two sons. On arriving in Australia Marius had little time to practice his art, as he was busy rebuilding his life. The moments of time he could snatch for his art became his therapy, the beginning of the healing process of the wounds the war had inflicted on him. The way back to normality was through his painting and, after a time he felt himself coming out of the darkness into the sunshine again.

Marius grew up just a stones throw from the birthplace of the great Dutch master Vincent Van Gogh, and as a young artist he immersed himself in the Van Gogh originals. The influence of Vincent can be seen in Marius’ work. Marius comes from a family of artists and has always enjoyed great strength and support from his family. He says that his greatest blessing is that his family appreciated art so much and that he received much spiritual uplift from the conversations he and his family continually had about art. When asked about his painting and what it means to him his answer is an emphatic “everything”. When asked, “why do you paint?” he replies, “Because I have to – what else is there?” And when asked to comment on his career he replies, “Well, I have done my best”
Michele Maddison is full time freelance photographer and travel writer who enjoys getting out into our wonderful country capturing images to share with people. In the early years, Michele's first camera was a groovy Hanimex with a 110 film, graduating to a Kodak disc camera. Well, they were all the rage in the 80s. Then towards her late teens she bought her first SLR Cannon. From her first SLR there was no stopping Michele, combined with her love for travel of Australia and overseas. Working in Sydney, Michele's motto was “work to travel and take photos". When she married her husband in the late nineties her adventure took her to Brisbane and then onto a small town in the Gulf of Carpentaria – Karumba, Queensland. This is where Savannah Photography was born. Karumba, holds some of natures most wonderful palettes – spectacular sunsets over the Gulf. As a full time freelance photographer and travel writer, Michele thinks nothing beats getting out into our wonderful country capturing images to share with you. More information about Michele Maddison. 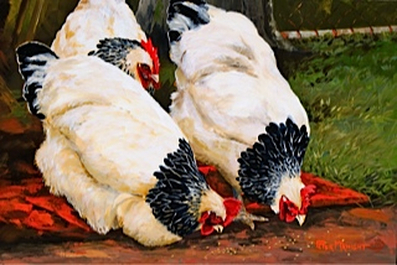 Breakfast with the girls by Peter McKnight
Peter McKnight makes a return to Frost this year after taking out the Peoples Choice and the Packers Prize in 2011. Peter will also take part in the Artists at Work initiative this year. Peter McKnight is a painter who works in acrylics and oils. He lives in Bensville, on the Central Coast of NSW. Peter is a TAFE teacher of mechanics but music and art have always been great passions that he has pursued as a hobby and interest. Over the years he has produced many art works for family and friends.

Recently, Peter has developed a desire to pursue art more seriously and he has exhibited his works over the last 2 ½ years. Peter says ,“I love to paint a variety of subjects and use different styles and mediums. I love the contrasts of light and dark that demand to be captured in paint. I am at a stage in my life when I finally have the time to develop my creative side by painting a wide variety of landscapes, seascapes and wildlife of the Australian bush.”

Peter Dwyer, from Barraba, is skilled at capturing evocative images of the characters and landscapes of our region. He won the 2012 Namoi CMA Photography Competition with his work “Field of Gold”. 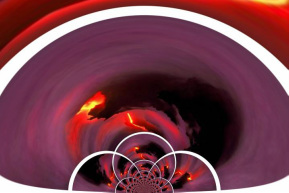 Volcanic Bluster by Mark McAlpine
Mark McAlpine, also from Barraba, creates vibrant art works using photographs and computer manipulation techniques. Mark says, "My mother inspired my artistic talents. She was a artist of sorts when she were younger. I paint at times pot ,sculpt free hand clay, draw, sketch, all self taught. But when I started using the computer I just went wild, couldn't stop myself, no formal training. Had a terrible time with teachers at high school."
Facebook